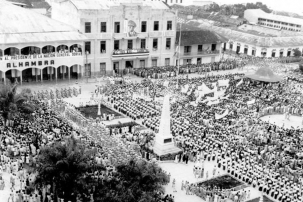 Iquitos was a small village inhabited by a tribe of Indians Iquitos. From 1864, with the visit of Marshal Castilla, Iquitos city became capital of the department. During the nineteenth century increased its trade with Brazil, but only since 1880, the rubber industry, began its expansion as a city.

From the time of splendor and luxury, when Europeans brought pavers and mosaics to decorate the mansions of the wealthy rubber barons, is the former Hotel Palace, Moorish style, and the Iron House designed by Eiffel (builder of the famous tower that bears his name in Paris).

Iquitos has always been the main Amazon river port in Peru. On November 9, 1897 Nicolas de Pierola names the city of Iquitos and Loreto department capital. The Congress of the Republic declared October 18 of 1,828 for the founding of the city of Iquitos, capital of the province of Maynas, Loreto region.

At present there are several native groups living in the jungle, many of which are in permanent contact with civilization, these groups live mainly in the margins of the Amazon, Napo, Ucayali, Marañón and Nanay.